The service course for Scott-SRAM Racing Team is in a small suburb outside Zurich. There are businesses and houses side by side. Locals sit and enjoy a drink at midday. In many ways, it’s a snapshot of small-town Switzerland itself. Welcoming. Clean. Idyllic. A keen sense of community.

When we walk up to the building where it’s located – more commonly associated with manufacturing – we meet Yanick Gyger – Scott-SRAM’s mechanic for the last 10 years – better known as “Yanick the mechanic.” There’s a bike sticker on the window and some parts lying around, but the exterior is otherwise unremarkable. As Gyger shows us in however, the tell-tale signs of bike culture and collaboration are clear.

There’s the Rocket espresso machine, complete with the word “Glorious” (emphasis on the “Rio”) commemorating a gold medal from 2016. A metre to the right, a fridge doorhandle has been swapped out for an old Truvative crank with a screw through the bottom bracket thread. There are posters signed by Nino Schurter. A set of gravel bikes. A map of places where the team has raced. Front suspension systems lined up neatly in a row – each one new. Passes from old world cup races. Then there is Gyger’s wrenching area, with enough Park Tools to make any do-it-yourself mechanic drool.

There are rows stacked floor-to-ceiling of tubeless tires, wheelsets, sealants, bikes, shoes, helmets and parts bins from long time supplier and team sponsor, Scott. And at the centre of this race-winning hurricane, discretely tucked inside an industrial park, is a name known in any bike shop in the country. A true character who has spent his entire 30-year career on a bike, first as a pro, and now a team director.

“Racing is in my blood and has been my life. Now I get to have a career after the career looking after this team, still enjoying the race atmosphere without any of the suffering that goes along with competing.”

Within minutes of meeting him in this environment, one finds it hard to imagine he’d be comfortable doing anything else. 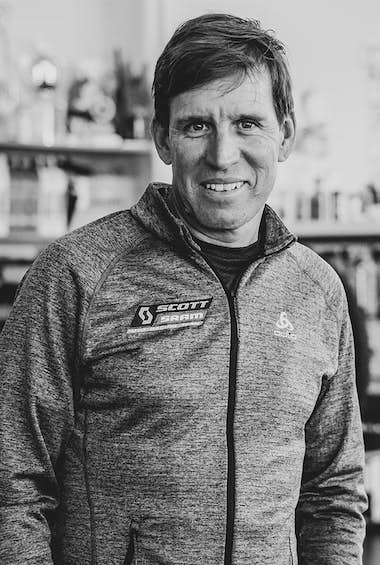 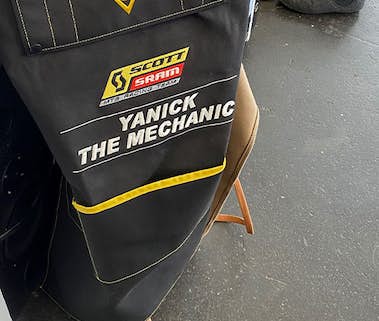 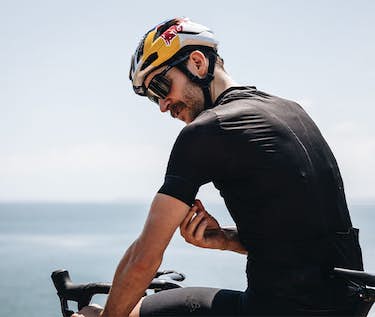 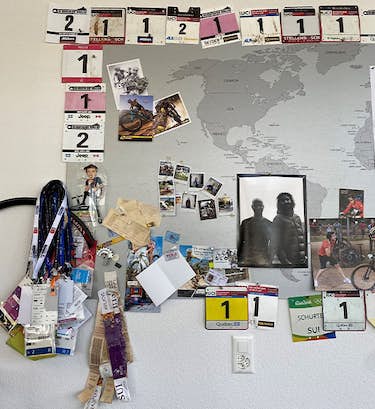 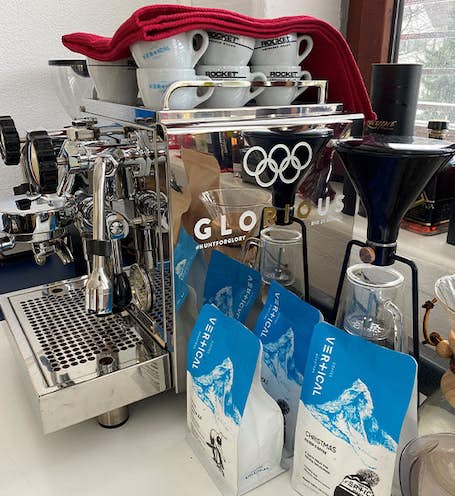 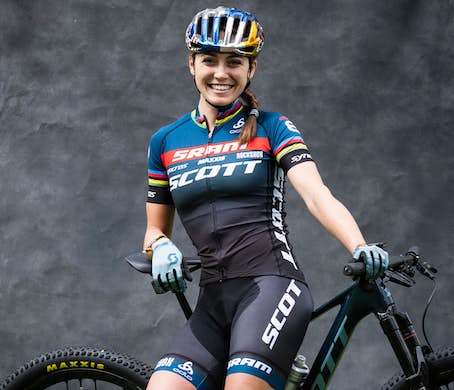 A history of innovation

Speaking is Thomas Frischknecht – a former pro mountain biker and one of the sport’s true pioneers and personalities. He is medium height, in his early fifties and very fit – the signs of a guy who still rides several times a week despite his last pro race being some years ago.

He fiddles with the setup of a new cross-country full-suspension bike, just tuned by Gyger, as we prepare a temporary studio for the purposes of this interview. With lighthearted banter, they exchange a couple comments and jokes about running and running shoes. He’s never seen the need to clock kilometres by foot with riding bikes still such a prominent part of his day-to-day.

“Frischi” – as he’s more commonly known to riders and friends – is the gregarious, outspoken mastermind of a team that began as Swisspower Mountain Bike Team nearly two decades ago. And even a short summary of his palmarès as an athlete is impressive: 15 world championship medals, a silver medal at the 1996 Olympic games in Atlanta, two-time world cyclocross champion and XC world champion (also in 1996) – all at a time when racing mountain bikes lacked the following and visibility it has today.

When he helped co-found this team, it was with the objective of getting kids to love bikes and possibly spotting a rare talent who could compete at elite levels. What would eventually come out of this program – with names like Nino Schurter, Lars Forster, Andri Frischknecht and Kate Courtney all featuring prominently on the world stage – seems like a far cry from those early and very modest objectives.

The first partnership with ODLO and Frischknecht happened in 1994 with a base layer deal while he was racing. Old pictures in ODLO office meeting rooms show him riding a then state-of-the-art, aggressively set up, Ritchey Mountain bike with the propellor – ODLO’s logo – on his race kit. His eyes look downhill like lasers. You can see the tenacity that marked him as a professional. After striking up a friendship with the company’s then CEO, he helped convince ODLO to get into performance cycling apparel. ODLO would support Frischknecht’s team in 1997 – both as a clothing and cycling sponsor. In the early 2000’s, he had his own “Frischi” collection.

Ever since, the company and Frischknecht would stay connected, with ODLO as apparel sponsor and with Frischknecht specifically, liaising on product innovation and borrowing insights from riders to refine designs. Throughout, both used Switzerland – home to what are arguably the world’s best mountain bike trails and a reputation for precision – as a backdrop from which to create. The longstanding partnership and its outputs – quality, consistency, performance – would become mainstays on both sides for years to come. 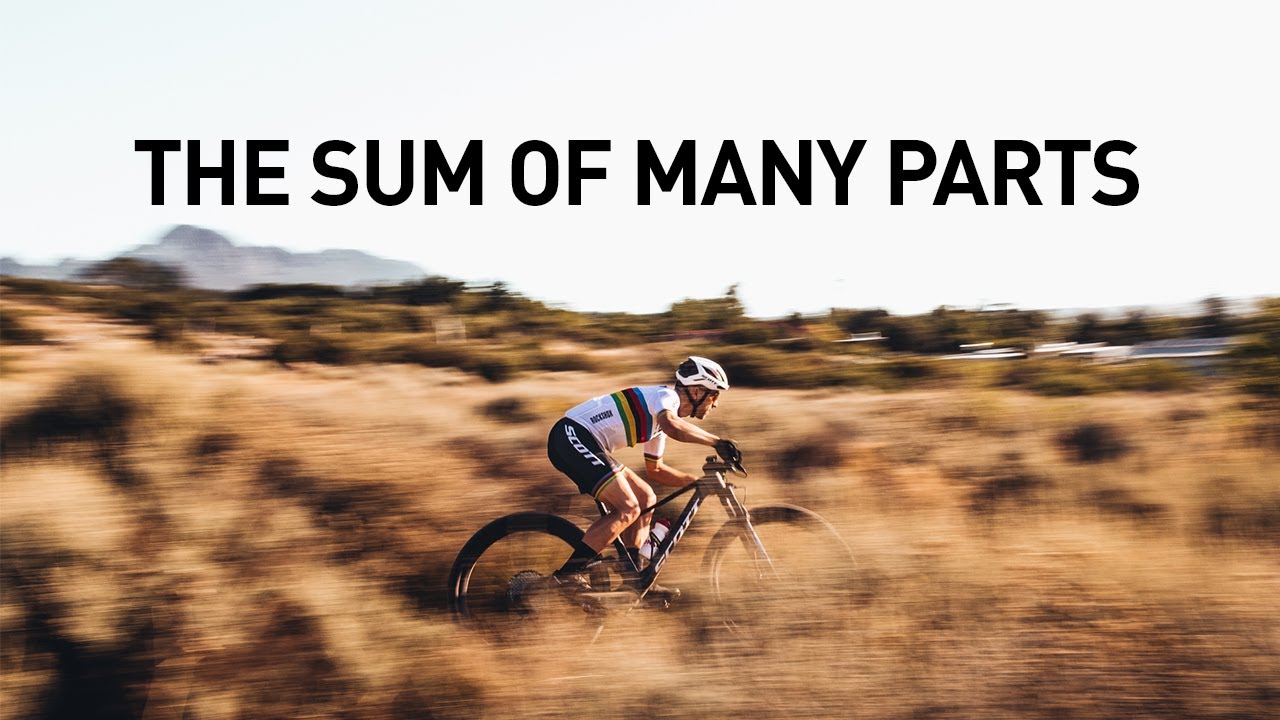 The right people at the right time

For one of the sports’ most successful athletes, Nino Schurter is also one of its’ most humble. He is tied with racing legend Julien Absalon for world cup race wins (33), is a 9-time world XC champion, an Olympic gold medalist and much more. People call him the GOAT, yet he talks about his 20-year career with the modesty of a stagiaire.

When we connect with him, he is fresh off a 9-week training stint in South Africa. He has travelled with his family – very important to him at this stage in his career, he says – ridden lots, and even found time to unwind, too.

For the last 24 years, Schurter has worked with the same coach, raced on the same bike brand, and largely collaborated with the same team sponsors. Scott has been with the team from the beginning. For years, ODLO has been both their on- and off-bike apparel sponsor – a year-round provider for their training, racing, and lifestyle needs. It’s evident the team values long-term partnerships. They’ve made a habit of staying with partners long-term, shunning change for change’s sake and preferring instead to invest in relationships – one of the reasons Scott-SRAM feels more like a family than a race program.

“We’ve been very lucky to have the right people and the right partners from the beginning,” says Schurter about the synergies with the team and the connectedness they feel with the partners they work with. “When I came in as a young rider, everything was set-up and not much has changed.”

“We always had a vision for how the sport would evolve,” he adds. “We’ve always had the right partners who shifted and adapted with the sport.”

For many cyclists, from one season to the next – a jersey is just a jersey and a pair of bibs, just that. There’s little that separates one from the next. Racing however reveals the truth. If the cut is wrong, or the chamois isn’t right, or the fabrics aren’t technical enough, athletes suffer. During several different conversations, Schurter and teammates Lars Forster, Andri Frischknecht and Kate Courtney all attest to this point in detail.

Forster had issues on another team that impacted ride feel. As a result, he could never get comfortable in the saddle. Courtney likes racing in skin suits, particularly in the heat, so she worked with ODLO to create a custom version completed in 2019. The team issue kit which ODLO creates specifically for Scott- SRAM is constantly being refined to rider specs and requests – inputs that then get trickled down into our collections like the new Zeroweight Pro bibs and jerseys.

“If you’re at the top end, you want the best,” adds 27-year-old Scott-SRAM Racing Team pro Andri Frischknecht during our interview, “and this is what we’ve gotten. You cannot create the best in one or two years – there’s a lot of technology in what we’re working on with our partners. And if it’s good for us – the pros – then we have something good we can offer to everyday riders.”

On the left-hand side of ODLO’s first floor showroom, pictures hang of the first cross-country ski suits it created that would go on to define an industry. There are signed Scott-SRAM jerseys and old team kit from AG2R La Mondiale (who ODLO also sponsored). Images of Odd Roar Lofterød – company founder – hang prominently. There are some old print ads. And further down, several technical track jackets from the 80’s with eye-straining patterns and colours all speak to the constant creation happening inside these walls.

This summer, the Zeroweight cycling collection – and more specifically the Pro bibs – are the next pieces of performance apparel destined to hang inside this room. An updated fit, industry-leading chamois and details like laser-cut edging and aerated featherweight fabrics – all taken from direct athlete feedback and made real by our product experts – have been made using a now-perfected 76-year-old process.

First there are prototypes, then gathering and implementing expert feedback, working with partners we trust and finally taking time to refine and perfect each one in real world scenarios. For the Pro bibs, that means long six-hour rides, racing, sitting around sipping espresso and short training rides over lunch. Use cases that allow us to craft something exceptional.

It’s a process built around trust. A process that has perhaps defined ODLO’s work with Scott-SRAM for two decades – one of the longest-standing collaborations in ODLO’s history.

“This partnership goes far beyond just training and racing,” adds Frischknecht. “It’s always the people behind such a brand that makes it interesting and important to us.”

“We’re pretty proud of that.” 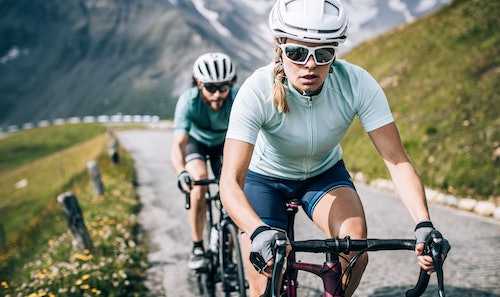 Cycling through the Swiss Alps with Nino & Andri 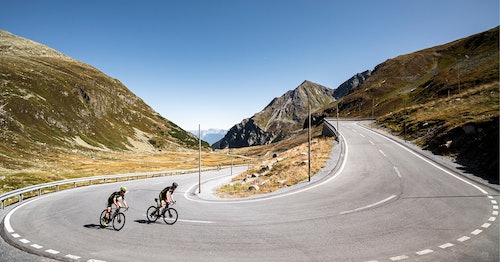 Fresh air, nice and quiet roads, good company, fast bike and nice weather – What more could you possibly ask for? In the latest episode of “The Escape” from SCOTT, the Olympic and multiple World Champion takes us on one of his favorite road loops in his local backyard.AT