Our winter sale is on. Shop even more styles at up to 50% off*. Women I Men I Kids
Want free shipping? Sign up or sign in and get free shipping for all your orders.
Extended 60-day return window.

This season, ODLO releases a series of base layers with Performance Wool powered by Nuyarn®. During a two-week reconnaissance trip to Svalbard, adventurer Jake Catterall wore our Revelstoke base layers in cold conditions and now shares his impressions.

Set the scene: how and where did you test this piece? What were you doing there? Why did you go? How long did you spend there?

Svalbard, northern Norway. Inside the arctic circle. The purpose of my trip was to learn about arctic exploration in preparation for my goal, which is a solo crossing of Antarctica. Since that goal is so big and literally life threatening, I need to take the necessary steps to get there.

What were the conditions like during your trip? Average temps? Swings? Storms?

Conditions were a mixture of total white out, clear and basically nothing in between. The crevasses were so deep that on the low-visibility days, you could see further down into them than you could see ahead. Pretty freaky. Temps in the summer months were stable at 0°C and a few nights at -5.

Luckily (and unluckily for me), we had no storms or wind. I really wanted a taste of arctic wind since Antarctica will bring it in full force.

Given how remote Svalbard is, how exposed did you feel out there?

The number of crevasses made exposure part of daily business. My only near miss was from my sled sliding into a crevasse and nearly pulling me in with it. Luckily, I heard it starting to move and positioned my footing so I could brace for a big pull. It sent a shock wave through the group, though, as it happened. It made everyone realize that death or danger can happen within seconds.

Another group about 20km from us got evacuated via helicopter because a polar bear attacked a lady in her tent while she was sleeping. She survived, but, again, a good illustration of the elements we faced.

First impressions: you arrive in Svalbard, set off and are wearing the Revelstoke. What did you like about it?

The first 24 hours were intense. We had a 1-hour, unsheltered boat ride to the start of the expedition, which was at the mouth of a giant blue-ice glacier. It was a cold and wet start followed by a climb to the top of the glacier with as much gear as we could carry. A mixture of cold (boat) and hot (climbing) use.

I was surprised at how well the Revelstoke managed body temperature between the extremes. I did feel a little itchy on day one. But that went away after we climbed to the top of the glacier and I got my first real sweat in.

Presumably this is not the first merino base layer you’ve worn. How did the Performance Wool fabric compare to other merinos you’ve worn in the past?

I love merino, but the Revelstoke brings something unexpected to the equation. The temperature management is something very special about this layer. I can run a high temperature and sweat very quickly if I push too hard; in an arctic environment, that can be lethal, so this is a major benefit.

How many days did you spend in the base layer? What did you observe as time went on?

I’ll be honest. I wore this for 12 days straight. The smell doesn’t really change after the first day (naturally anti-microbial), so I didn't see the point of changing. After day 10 and a lot of pulling with a pulk, there was some stretch in the fabric, but that was probably due to it needing a wash to reshape. I was working very hard in it.

Point three says it all, really. The thermoregulation is impressive. You feel it as soon as you're wearing it.

How did you find the fit and sizing, durability and overall quality of the base layer?

The fit was slightly less skintight than I’m used to, which made me uneasy at first. But I got used to it. It felt strong. It’s a product you know responds well to getting pulled through tough moments.

You leave Svalbard. Where’s your head at with regards to your longer-term, Way Beyond objectives?

A few years ago, I set myself a task to take on a solo crossing of Antarctica. I am on a journey. A learning process before I’m ready for that. Leaving Svalbard gave me a lot of clarity on what work still needs to be done, but it also made me feel proud to have taken another step towards this goal.

I’ll be coming back to Svalbard for a more intense trip. Something much tougher.

Finally – state of mind. How difficult was this relative to other challenges you’ve taken on?

I always approached this as training, and from a physical point of view, many of us can do it. But since this was the first arctic trip I’ve done, the right mental POV was important. I went into it with what I refer to as the “beginner's mindset.” An open minded approach to trying new stuff without the anxiety adult mind we tend to use.

This didn’t challenge me the same way as cycling 1400km nonstop, but it allowed me to learn some of the essentials before I take on the harder challenges as my journey unfolds. I believe in experience above anything, and we truly learn through doing. Pulling the sled every day was another way for me to practise keeping my head focussed on one thing. I've practised this for years in endurance sports. It’s easily the best tool for success, but it’s not easy to do.

Big picture, I’ve designed and dreamed of this life, and it has come true in small steps. Every step has huge importance. You learn from the journey. I encourage anyone to start their journey and to respect the stage they are at as a potentially life-changing moment.

ODLO drops its 100 per cent knitted-in-Norway merino collection for babies and kids this December. Why should you check it out? The reasons might surprise you.

In keeping with this season’s focus, Unity is Strength – which explores the power of pairs – we’re introducing the Slokar – a new design collab with legendary snow-sports brand, Burton. 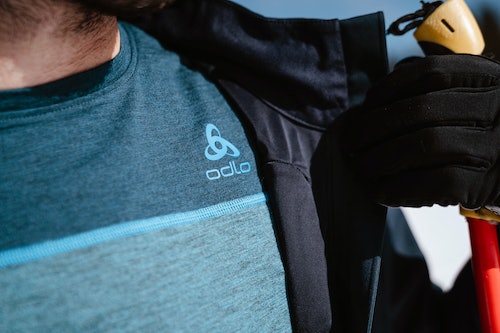 Nuyarn® is the world’s first performance merino wool that behaves like wool does in nature. As we release a multi-season, year-round collection featuring Performance Wool merino fabrics for everyday athletes who gravitate towards natural, let’s take a closer look at what makes Nuyarn® merino unique.